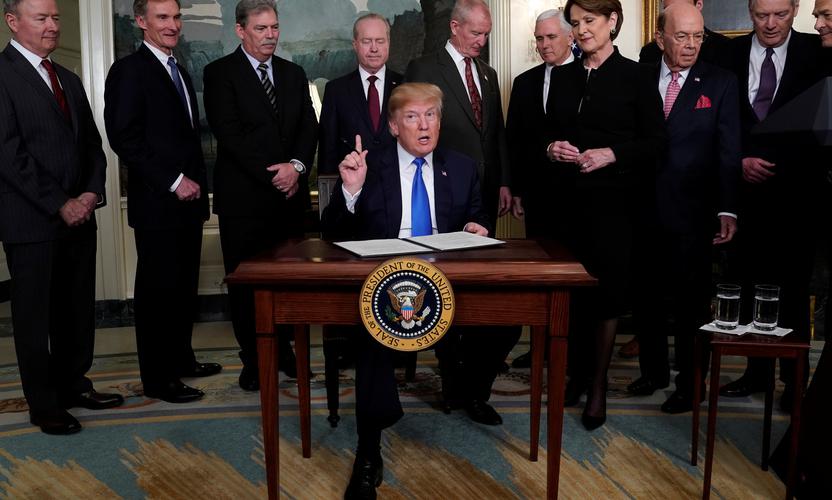 All eyes will be on the G20 meeting in Osaka next week to see whether Donald Trump and China’s Xi Jinping will strike a deal that de-escalates their intensifying trade war. The global tech industry will be watching particularly closely.

The recent US ban on American companies doing business with China’s Huawei and the looming threat of another and more serious round of tariffs are a one-two punch for the industry, and not just in China and the US. In our view, these measures will reverberate throughout the entire tech supply chain, which has become increasingly global and interlinked. These links could now be put to the test, unless Trump and Xi can agree a ceasefire.

The following is a case study of how the trade wars are disrupting not just bilateral trade but global markets and supply chains. The tech industry is a good example precisely because it is so globalised, with interwoven supplier relationships, and has figured so prominently in the current debates.

If implemented, the next round of tariffs proposed by the Trump administration will have a much greater impact on the global supply chain than previous rounds. At stake are tariffs of up to 25 per cent targeting 3,800 products and representing around US$300 billion in US imports from China that weren’t covered in the previous two rounds of tariffs. US trade officials are conducting public consultation on the proposal that will run until June 25 before moving forward.  From a tech industry perspective, by including smartphones and PCs, we think these new tariffs would push up prices for consumers and lead to a falloff in demand.

At the same time, the decision last month to place Huawei on the ‘entity list’ effectively bans US firms from doing business with what is one of the biggest global players across product categories ranging from servers to smartphones. Huawei accounts for around eight per cent of semiconductor sales globally, is the largest network equipment supplier in the world (with around 30 per cent market share) and second largest smartphone supplier (18 per cent market share). It also has a burgeoning PC/server business and a rapidly growing cloud infrastructure division in China. All of these operations require at least one critical component that can only be sourced from the US. Hence, the ban presents a systemic risk to Huawei’s business. This is a major event. Not just for Huawei and China, but for the entire global tech industry, with its complex web of interdependence.

In a recent interview with CNBC, Trump suggested the US approach to Huawei could be part of its broader trade negotiations with China, indicating that the issue could be on the table for discussion at the G20. There are two schools of thought on this. One is that the Huawei ban and subsequent issuance of a temporary licence is a warning signal to China that the US has more up its sleeve than simply tariffs. It is similar to the ZTE ban last year, which was eventually reversed and which Trump claimed as a big political win. Alternatively, the ferocity with which the US has gone after Huawei (long before the latest action) includes bringing non-US companies under the ban’s umbrella. Some observers see this as a sign the US intends to effectively drive Huawei out of business. Although a private company, Huawei is very much a national champion in technology in China and is critical to the rollout of the 5G network.

Regardless of the outcome of trade negotiations, Huawei and China will step up their efforts to localise components, including internalising the smartphone operating system, as well as key components such as certain microchips.

However, China Inc.’s ability to fully localise supply faces significant challenges. Recent decisions by some key American suppliers to stop selling to Huawei could limit its ability to develop all semiconductors for future generations, given they are based on US intellectual property. Similar electronic design automation (EDA) tools from US firms are also likely to be restricted.

One worst-case scenario is a ‘Tech Cold War’, leading to separate technology ecosystems, with China developing its own tech stack, with different standards to the Western world. This would effectively cut off non-Chinese companies from supplying or selling into the Chinese market, which will be the largest market in the world for many products, if it isn’t already.

Smartphones and notebooks in focus

Previous rounds of US tariffs had a minimal impact on the global tech supply chain, given they mainly affected servers and desktop PCs, which tend to be relatively smaller volume and higher value. Take servers, where global supply is approximately 11 million units, with prices ranging from $3,000 to $7,000. The low volume, high value nature of the category allowed the supply chain to relocate production relatively easily, as the additional costs from transport, customs and lower efficiency were still easily outweighed by the tariff.

The next round of tariffs could have a much greater impact, as it would include smartphones and notebooks. These are much higher volume and lower value products. In the case of smartphones, global supply is 1.4 billion units with prices ranging from around $300 to $1,500 per phone. Hence, the additional costs from relocation could be greater than the tariffs. Additionally, being a consumer product, demand and production are much more seasonal; this requires a flexible labour force, which can be difficult to source.

What does all of this mean for end consumers? We calculate that a 25 per cent tariff levied on US smartphone imports has the potential to increase retail prices by up to 15 to 20 per cent, with the tariffs implemented on the cost of goods sold. However, the final price increase would probably vary widely, ultimately depending on how much each company chooses to pass on to end consumers.

Companies with wider hardware margins are better positioned to mitigate price hikes by absorbing some of the higher costs, but others with narrow margins may be forced to pass effectively all the tariff increases on to end consumers. We expect this would impact demand in the US for companies with Chinese tariff exposure. Even at the high end of the market, recent new model launch cycles have shown that smartphone demand is more price elastic than previously thought. In short, consumers and tech companies are both expected to feel the pain from the next round of trade tariffs - unless China and the US can strike a deal.