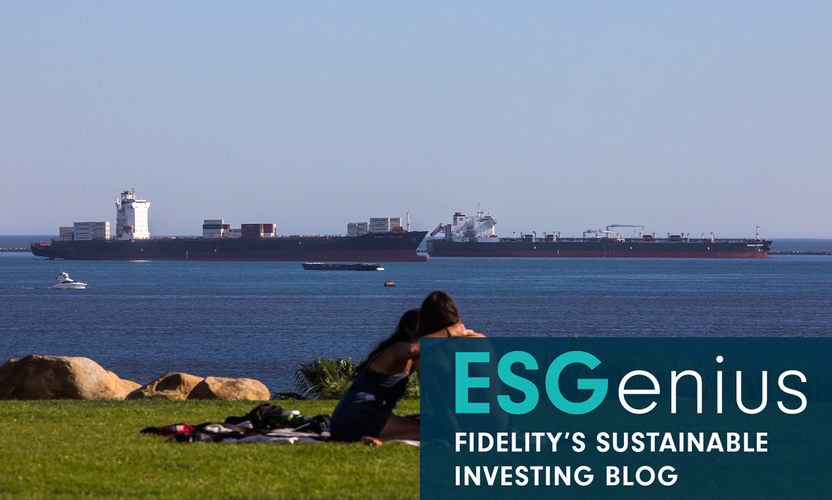 Restrictions on travel and trade were closing off ports and canceling flights, causing severe delays to the ordinary rotation of cargo vessel crews between their ships and home ports. Tsai soon saw it was not just a liability for the commercial shipping sector but also a brewing humanitarian crisis for the hundreds of thousands of seafarers who are the engine of global trade.

A trickle of stories turned into a flood. One European captain of an Asian dry bulk vessel was stuck at sea for months, forced to miss his son’s funeral. Another captain sailed astray of his charted course to protest the lack of disembarking arrangements for his crew, stranded at sea beyond their contracts. Today, an estimated 300,000 seafarers around the world remain stuck aboard their vessels, prohibited from disembarking at port or unable to secure flights home, while another 300,000 face financial ruin due to prolonged periods of being unable to return to work.

Prompted by Tsai’s concerns, Fidelity’s global team of experts in sustainable investing recently launched a campaign to raise awareness over the wellbeing of seafarers. As part of a global engagement with industry and associated stakeholders, we are reaching out to an initial group of about 30 firms across the shipping, cargo, airline and retail industries, as well as issuing a call to governments to prioritise action on the issue.

“If no one does anything, it’s just a matter of time before something disastrous happens,” says Flora Wang, Director, Sustainable Investing.

Seafarers are vital to the global supply chain - especially during the Covid-19 pandemic - as they ensure the uninterrupted global delivery of a vast array of goods, from dry bulk cargoes like edible grains or iron ore, to energy inputs like oil and gas, to a broad range of consumer products. Yet Covid-related restrictions on movement or port arrivals coupled with the drastic reduction of flights has meant that some seafarers have been forced to work for 15 months or more away from their families, way beyond both the industry standard of nine months for a stint and the regulatory limit of 11 months. These long periods of isolation are raising mental and physical health hazards, and putting into question their ability to ensure the safe handling of cargo.

So far, Fidelity has engaged a range of stakeholders including shipping companies, airlines, and oil & gas producers. Many of them have reacted positively about the need to take action on behalf of seafarers. One large shipping company replied to say its chairman felt very grateful for the awareness campaign and pledged to make “all kinds of efforts to solve this crew change problem.”

The chairman of another large shipping firm in which Fidelity holds a substantial interest replied:

“We really appreciate that you as a large and responsible investor care about the work that our seafarers do to keep the world supplied during these challenging times … Our seafarers have demonstrated extraordinary loyalty and patience and they will be grateful to have a major shareholder who not only cares but is also willing to lend support to help solve this problem.”

Part of the issue comes down to how commercial seafarers have been classified through the outbreak. Countries have relied on shipping to cope with lockdowns under Covid, yet seafarers are not widely recognized by governments as so-called ‘essential workers’ or ‘key workers’ who would generally be granted exceptional rights to disembark in a port. This is a major issue that has prohibited merchant seamen from returning home. Most recently, in a Sept. 11 statement, United Nations agencies including the International Maritime Organization jointly urged governments to treat seafarers as key workers and resolve this humanitarian crisis.

“A key-worker label will help ensure seafarers are exempted from travel restrictions and are able to board and disembark at different ports,” says Fidelity analyst Terence Tsai. “It would help to remove a multitude of roadblocks, including visa restrictions and constantly changing local customs rules.”

Calling attention to the issue

Surprisingly, until very recently there had been little discussion in the investment community about the issue of the wellbeing of seafarers, despite both the humanitarian concerns and general operational risks it posed to shipping companies.

“With about 90 per cent of global trade done by sea, seafarers are the lifeline for keeping our economies open,” says Tsai.

For an asset manager like Fidelity, lobbying to improve the conditions of seafarers makes sense from an investment perspective too. The performance of some of the companies held by our funds will ultimately be linked to the safety of cargos being handled by seafarers. Ensuring that the rights and interests of seafarers are represented helps lower the operational risks to the sectors involved and allows global trade to continue in a sustainable way.

Fidelity’s awareness campaign isn’t intended to offer prescriptive answers to this complex problem; instead it aims to help prompt stakeholders across the supply chain to work together to find the best solution. As we navigate through the Covid crisis, it becomes even more crucial to take an active role in engaging with the companies in which we invest.