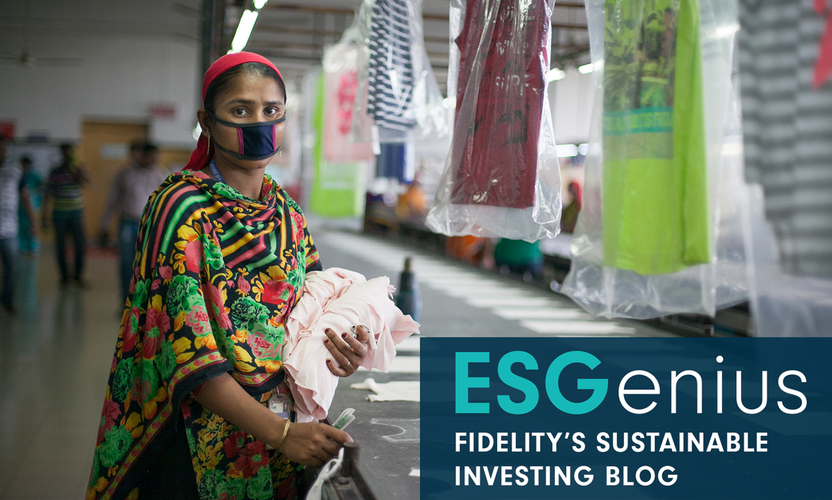 Edith Head, the Oscar-winning costume designer who created the iconic little black dress Audrey Hepburn wore in Breakfast at Tiffany’s, once said: “You can have anything you want in life if you dress for it.” Today’s fashion consumers seem to have taken this advice to heart, buying up an ever-expanding range of designs at an ever-faster pace.

For the garment industry, this trend toward ‘fast fashion’ has been a pattern for profits. Turnaround times for designing, manufacturing and stocking shops with outfits have been trimmed to a wisp. But fast fashion comes with environmental and social costs, and investors are starting to pay heed to these. Boohoo is the most recent example of this.

UK fast fashion brand Boohoo’s business model relies on the continuous introduction of new styles and designs at low cost. That strategy has enabled the company to generate attractive margins and strong returns on capital.

However, there have been news reports in the last few years that Boohoo’s low-cost model could be compromising conditions for its workers. While this had not been proven and the company had been taking steps towards improving working practices, we felt there were real risks around Boohoo’s sustainability and our concerns were not completely dispelled after discussing the issues with the Chairman/Founder. Consequently, when we initiated coverage of the stock in 2019, we gave Boohoo the second lowest rating on our proprietary sustainability scale despite generally high scores from third-party agencies.

Recent accusations in the press that some of Boohoo’s supplier factories in the UK city of Leicester had underpaid workers and were not taking adequate safety precautions over the spread of Covid-19 brought these past allegations back into focus. Through the crisis we maintained dialogue with the company and noted they were involved in suppling personal protective equipment to medical staff and have initiated an independent review to address the recent safety issues in factories.

However, we think there is now an increased risk that the UK government could impose additional oversight on the industry, which would in turn affect Boohoo’s returns. As we await the results of the independent review, we continue to maintain its low sustainability rating.

The hidden costs of fashion

Key areas of (often hidden) sustainability risk lie in the fast fashion industry’s demand for resources and input materials, factory labour conditions and industrial or post-consumer waste. There are issues around the pollution from chemicals, dyes and synthetic fabrics seeping into the water supply, cotton farming practices, the use of petroleum in the manufacturing process, and the carbon footprint of transporting clothes from factory to shop.

Consumer awareness is already high when it comes to some of these issues, for example the opposition to sweatshops in developing countries, but it does not always translate into broad changes in consumer behaviour. Instead, the focus is shifting to the role that investors, especially asset managers and large institutions, can play when it comes to raising sustainability standards across the industry.

By restricting capital, investors can make funding prohibitively expensive for fast fashion providers so that they adjust their business models. Investors can also reward companies who excel in applying sustainability factors, potentially lowering their costs of capital. Currently, few investors are turning away from fast fashion, but that sentiment could shift over time if risks come to the fore.

We have found that companies are generally aware of the potential for sustainability concerns to reach a tipping point at which consumers, investors, or both start rejecting brands with poor practices. Some of the biggest players are taking proactive steps to mitigate this risk.

H&M (Hennes & Mauritz), for example, has introduced a garment collection programme that accepts old clothes of any brand and in any condition in exchange for a discount voucher on future purchases. The company guarantees that none of the clothes collected will go to landfill and instead will be reused or recycled, helping to reduce waste. Part of the problem of recycling clothes is that only a fraction of the fibre is suitable for making new clothes without a loss of quality. H&M is investing in technological research to disaggregate yarn so that more material can be reused in new clothing. The company says this initiative has increased the proportion of sustainably sourced material in their new garments from 20 per cent in 2015 to 57 per cent in 2019.

Regarding social factors, Inditex, owner of the Zara brand, has targeted working conditions in its supply chain by establishing a rigorous and comprehensive audit system. In 2019, the last reported financial year, the company employed nearly 800 external auditors to carry out over 12,000 supplier checks. These assessments covered a range of workplace conditions including wages, hygiene, working hours, freedom of association, collective bargaining rights and discrimination. Importantly, Inditex pays for the audits itself to avoid conflicts of interest arising for its suppliers.

A third example is Primark, owned by Associated British Foods (ABF), which is seeking ways to reduce its demand for resources. The company has partnered with Greenpeace to train its cotton suppliers in more efficient farming techniques that save water, use less chemical fertiliser and pesticides, and produce higher crop yields. In Pakistan, where the programme was launched, input costs have fallen 12.9 per cent and average profits have increased 27 per cent for farmers after one year of training.

Engaging with a fashion retailer in Germany

H&M, Inditex and ABF are taking steps to improve sustainability, but active shareholders can also engage with companies to push for change.

We worked with one large high-street, fast fashion chain, which had weak demand in Germany[CFB1] [GN2] . The company believed this was due to poor perceptions among consumers who often associated cheap prices with questionable sustainability. Our opinion was that the company was being unfairly penalised; its strategy relied on scale to reduce prices rather than compromising on sustainability.

To confirm our view we commissioned an independent survey that showed that two-thirds of shoppers in Germany did see ESG as important, a third saw the company as being a worse ESG offender than others, and some shoppers at the margin had turned away because of ESG concerns.

We tested the management to see what actions they were taking to manage these ESG risks and became convinced that consumer perceptions were misplaced due to a fundamental misunderstanding of the business model. Now we are in dialogue with the company to explore ways it can educate investors and consumers about its practices. We also expect greater sustainability disclosure from the company in the future including via public market events.

Whether consumers or investors - or both - drive the changes in fast fashion, the end result is likely to be the same: a divergence in company valuations between sustainability winners and losers. Some companies are already adopting sustainable policies and can show they are having a material impact on sustainability metrics. These companies often have higher valuations than sustainability laggards because they are less risky. This could eventually spur some degree of industry upheaval as management teams integrate sustainability more fully into their business models, prompting consolidation or even exits from the sector.

To return to Breakfast at Tiffany’s (the book this time): “The answer is, good things only happen to you if you’re good.”