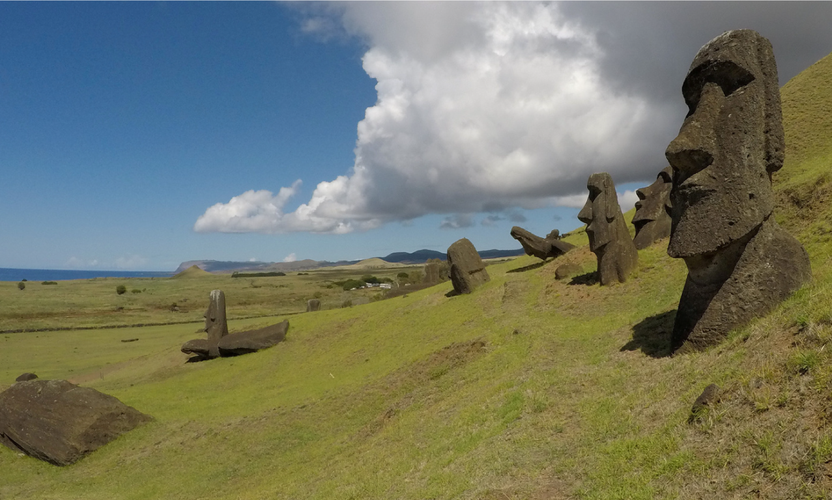 When the first Polynesian settlers arrived at Easter Island in the 1200s, they found a lush paradise, covered in trees. The settlers used these trees to build houses, light fires and, of course, construct frames to erect the famous head sculptures - the moai.

But gradually, the landscape began to change. The statues soon became an obsession, with the islanders consuming ever more resources to build bigger monuments to their power. The trees became scarce, their decline accelerated by rats gnawing at their roots.

When the first Europeans arrived some 400 years after the first settlers, they found enormous statues, a handful of emaciated islanders, no trees, and lots of rats.

While we’ll never know exactly what happened to change the environment so radically, there’s no doubt that the arrival of human settlers into a closed system had changed the landscape for good.

No man is an island, wrote John Donne. By the end, Easter Island had very few women or men.

Abundance had turned to scarcity. And scarcity turned to absence.

The philosophy of Milton Friedman has dominated economic thinking for the past 50 years. Yet two of his central ideas - monetarism and the “Friedman Doctrine” of shareholder primacy - have come under increasing challenge.

In 1963, Friedman declared that inflation is a monetary phenomenon. But the relationship between monetary policy and the prices of goods and services is no longer predictable.

Central banks have struggled for a decade to lift inflation to the lower band of their target ranges - and in Japan, for even longer than that - despite policies designed to supercharge the money supply.

Friedman would be shocked to learn that a European Central Bank in 2019 had set interest rates at minus 0.5 per cent and is buying bonds at a rate of 20 billion euros a month. He might well assume Europe is suffering from hyperinflation as a consequence. But inflation in the eurozone is actually running below 1 per cent. The conventional relationship between money supply and inflation seems to have broken down.

And meanwhile, what of Friedman’s second idea? Well, since he developed his theories in early 1970s the role of corporations has transformed. Today, some companies – huge, global and powerful - are beginning to eclipse the role of governments.  As a result, even the CEOs of the biggest corporates have said that running them solely for the benefit of equity owners is no longer an option. That includes CEOs of the US Business Roundtable, who earlier this year embraced “stakeholders” over “shareholders.”

Just as Donne’s man or woman is not insular, likewise, businesses don’t exist in isolation – they have multiple stakeholders, from employees, to the communities they work in and serve and the planet at large.

The start of circularity

Economics is the science of scarcity. And Friedman’s ideas solved the scarcity problems of his day. Things that were scarce in his time like price stability and ease of access to financial capital were made more abundant by his ideas.

The world has made undeniable strides in the past half-century. Malnutrition has plummeted and living standards have risen - and people are enjoying those standards for longer as lifespans extend.

But the cost has been high. We have choked the ocean with plastic, burned our forests and altered climate patterns. And we have changed the nature of scarcity.

Now we are beginning to prize things like positive yield, “environmental capital” and societal stability. These are things that Friedman might have considered inexhaustible. But, as we are learning, they too have their limits.

Friedman helped solve yesterday’s problems of scarcity. But the world today is faced with a pair of contradictory terrors: the economic fear that growth will soon come to an end, and the ecological fear that it will not.

And while we wait for another Friedman to come along, we, as investors - and not as economists - must adapt to the realities of today.

Our challenge is to move to a steady-state circular economy, to reuse and reprocess. To move from a linear world in which we make, consume and then dispose of products to one where waste can be fed back into the system as a raw material.

As we’ve already seen, history is littered with species and civilisations that stayed linear and ran out of road.

At the moment, only around 9 percent of the world’s economy can be considered as “circular,” or as being recycled and reused.

But from the marches of Greta Thunberg to the proposals for a Green New Deal in the US, the idea of a new economic normal is beginning to take hold in the minds of policymakers – and the general public.

Today’s young are already weighed down with concern about whether there will be a planet left to inherit from their parents.

As investors, we have to adapt our processes too, to account for this changing world.

Which business models are best placed to weather this change?

Our measures of economic health will also have to evolve. And as investors, our job is about making sure the companies we invest in will be able to adapt quickly enough to the changes too.

Gone are the days where the CEO of a company could focus alone on earnings as the single measure of success.

This marks a deep philosophical change. Shareholder value is still a vitally important driver of corporate behaviour but it is not the only one that matters.

Active asset managers have an important role to play in holding corporate management to account.

And it’s clear that there is a strong and positive link to financial returns. According to an academic study, ESG engagements generate an excess return of almost two per cent over the year following the initial engagement. Engagement on corporate governance and climate change themes was found to be the most profitable, generating excess returns of nine per cent or more. Working together with corporates we have a better chance of sustaining that positive momentum.

The economic paradigms we’ve relied on in the past solved the problems of scarcity of the past. But if our capital markets are to survive as a system and maintain their licence to operate, they must solve the scarcity problems of the future.

How long will our system take to transition to this new reality? It’s difficult to predict, but then as Rudi Dornbusch said, “In economics, things take longer to happen than you think they will, and then they happen faster than you thought they could”.

This is an excerpt of a speech I gave at a Société Générale conference in Paris on 21 November.