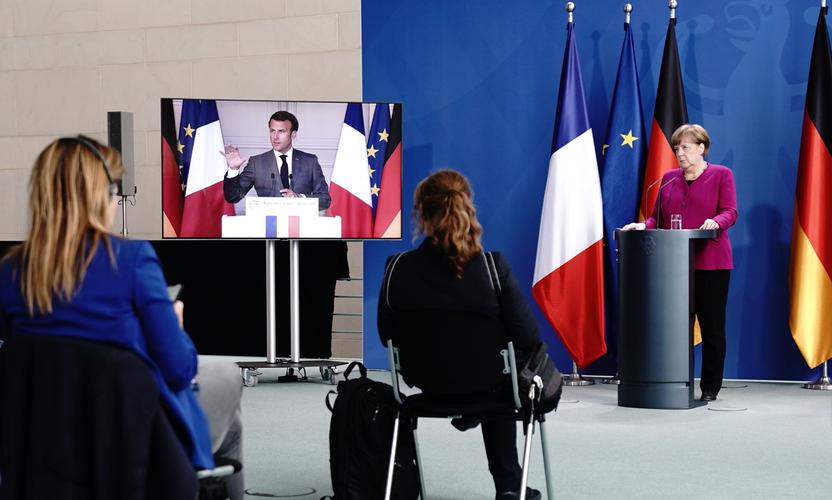 But agreement is still needed from the rest of the EU and, crucially, the rest of the “frugal four” (besides Germany) - Austria, Finland and the Netherlands - and needed soon. The clock is ticking for policymakers as economic data deteriorates and job losses mount.

While the proposal has lifted periphery bond markets, European investors will want to see buy-in from these key member states, if spreads in sectors such as Italian government bonds are to tighten further and fears of a future sovereign debt crisis are to recede.

The new Franco-German deal is a significant breakthrough for the bloc. For the first time in its history, two of its biggest countries have agreed on a method of funding that will issue common EU debt for new investments.

Funding will be made from the €500bn long-term recovery fund to the region’s weaker members to help them recover from the crisis. Funds for the vehicle would be raised through the EU’s budget, spreading the euro borrowing requirements across the different countries that pay into it.

Alongside the recovery fund, the agreement has three other parts: a health strategy, speeding up the green and digital transition, and enhancing economic and industrial resilience - all of which could influence how the recovery fund is deployed.

Achieving consensus may be hard

The approach may go too far for northern Europe, and not far enough for southern Europe. Comments from Austria’s Chancellor Kurz suggest the country remains opposed to any form of debt mutualisation, insisting on preserving existing mechanisms that imply additional borrowing by affected member states.

But it is clear that all EU countries, even those less impacted by the pandemic, will benefit from a swift and strong recovery in neighbouring member states, given their economic interdependence. For instance, 50 per cent of German exports are to the rest of the EU. Even more importantly, the proposal could help revive European community spirit, damaged by populism and, more recently, by national tussles over medical supplies.

If no agreement can be reached in the next few weeks, the downturn in Europe could be prolonged and the recovery much more difficult to establish.

News of the deal lifted periphery bonds, with five-year Italian BTPs trading 33 basis points tighter in the 24 hours that followed but remaining above pre-crisis levels. Equivalent Spanish and Portuguese government bonds tightened by around 16 basis points. Other markets and risk assets also benefited, but Eurozone spread compression will not happen in a straight line.

There are still plenty of moving parts that have the potential to disrupt EU bond markets, not least the speed of the economic recovery in countries most affected by Covid-19 such as Spain and Italy. The latter remains especially vulnerable to a loss of confidence in its ability to borrow.

Negotiations over the EU budget and the future 2021-2027 EU ‘Multiannual Financial Framework’, of which the recovery fund is part, hang in the balance and the German Constitutional Court recently demonstrated how it could throw a curveball into the European Central Bank’s attempts to keep money flowing around the bloc. Nonetheless, with this agreement, we believe the EU’s biggest countries may have crept a little closer to the eventual compromise needed to bring about economic recovery and ensure the Union can survive and thrive. It may even have opened the door to larger scale debt mutualisation.