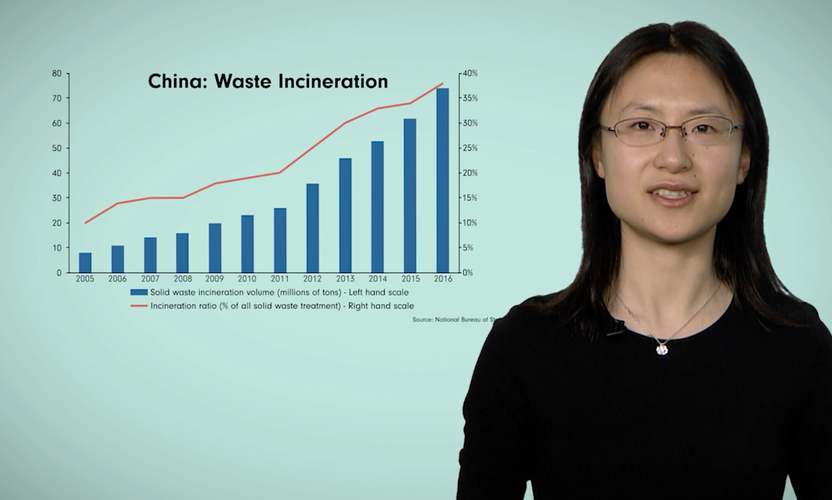 Neil Gough: China’s the world’s biggest emitter of greenhouse gases. It is also quickly becoming a global leader in fighting pollution and promoting investment in green technologies. So how should investors think about ESG, or environmental, social and governance factors, when it comes to China? From coal and gas to steel, to new waste treatment technologies, this is how Fidelity’s experts on the ground see China’s environmental priorities taking shape...

Jenn-Hui Tan: Environmental protection is one of China’s key national priorities and we expect that focus only to continue to grow. Since 2013, China has developed a very comprehensive regulatory framework for environmental protection. That framework is centered around new regulations, inspections, production caps, guidance for specific sectors that are polluting and/or are creating excess capacity. And finally enforcement, which we notice has also increased substantially in the last few years.

Casey McLean: Industrial users, which are manufacturing entities of all sorts in China, have traditionally used coal as their source of power because it’s the easiest, cheapest and most available fuel source in China. However, the government’s realised that this is a key source of air pollution and have mandated that these users switch to gas-fired power. So if you look at the provinces that have had the biggest increase in gas use over the winter period they coincide with the ones that have had the biggest reductions in pollution. That's not happening overnight. It’s only a small part of the country so far. But the results have been quite dramatic in terms of pollution reduction.

Neil Gough: China’s top down approach to industrial policy making also shows how efforts to rein in debt and overcapacity have had real and measurable environmental benefits in recent years. Particularly when it comes to the steel and coal sectors.

Forest Shultz: China has engaged in supply-side reform really to achieve two goals. The primary goal was to ensure the stability of the financial system. The steel and coal industries had over a trillion USD of liabilities and at prior coal prices, in aggregate, the coal industry was losing money. And by eliminating dirty capacity, and by restricting production during periods of high pollution, China was able to achieve two goals. One, increase the profitability of these industries so they were better able to service their debt and not pose a risk to the financial system. And two, they were able to reduce the pollution which was an unfair burden on people living in the north east of China. The real takeaway is that China initially approached the capacity rationalisation - they initially approached this supply side reform of the steel and coal sectors - from a financial perspective. But they carried it out in a way that had a real ESG outcome, that had a real social benefit to all of China.

Neil Gough: Shutting down polluting factories is one part of the solution. At the same time, treating more municipal waste and moving away from using landfills is a huge growth area for China.

Sherry Qin: In recent years, trash incineration is getting more popular because it turns trash into power and heat and it’s more environmentally friendly. As the environmental awareness and the land price increases, the local governments are more likely to use waste incineration instead of traditional landfill because the landfill is also quite polluting to the soil. And also it takes up a huge land size. So if you’ve got rising land cost, the government will prefer to use incineration facilities which don’t take up [as much] land for the treatment. The incineration ratio has increased from less than 10 per cent 10 years ago to over 35 per cent today.

Neil Gough: China's intent to cut reliance on landfills and clean up smokestack industries is clear and has benefits for both financial and environmental sustainability. But success requires a careful balancing act by policy makers.

Casey McLean: The biggest challenge is probably enforcement of the policies. Many of these policies have been in place for a number of years but have not been enforced at the local or provincial level. I’m seeing a renewed focus from the central government to enforce policies this time and it seems to be having a much greater effect. The second major challenge is maintaining strong economic growth and full employment while capacity in these industries is being cut. How the government manages these conflicting objectives is going to be the key to success going forward.