The MSCI Asia ex Japan Index, for instance, is dominated by the big technology names such as Tencent, Alibaba, Samsung and Taiwan Semiconductor. Nearly 32 per cent of the index is weighted to just one sector: information technology, and Chinese companies make up seven out of the top ten holdings.

The index has a higher allocation to two tech stocks - Tencent and Alibaba at nearly 11 per cent, than its entire allocation to the other big emerging economy in the region: India at 9.7 per cent. It’s a similar story for the MSCI Emerging Market index and the FTSE Emerging Index, which both also count Chinese stocks among their top ten holdings. 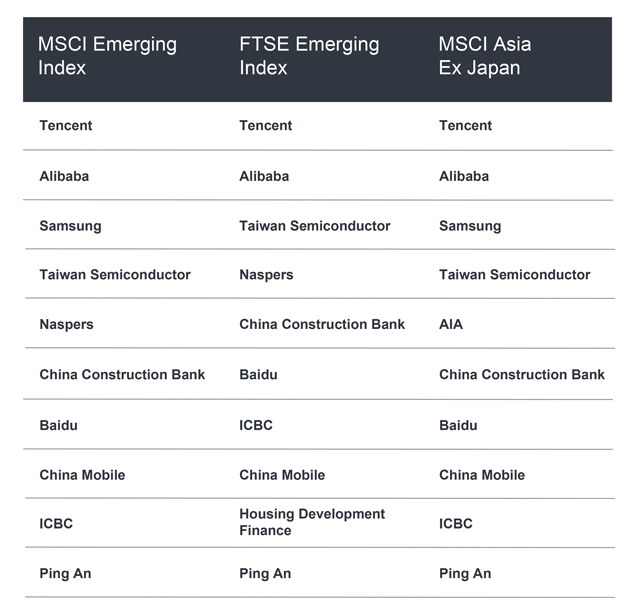 Where’s the growth coming from?

Economies are not the same as their stock markets, and this is especially true for Asia. If investors are to capitalise on fast-moving industries in the region, they are unlikely to be able to access them through established indices.

There are major structural shifts transforming Asia - the move from offline to online, highlighted by the dominance of e-commerce giant Alibaba, and a growing middle class that is changing its shopping habits and moving up the value chain. There has also been a surge in entrepreneurship which has seen a blossoming of dynamic, new businesses across the spectrum - from fintech and online retail to newly minted enterprises in the gig economy, piggybacking China’s growth story. Most of these more nimble businesses are still to appear on broad market indices. A world awaits the investor willing to explore.

Some of the sectors that are likely to continue benefitting from the Asia growth story are:

Cookware and small appliances: There are two legs to the China story - one is the rising middle class stocking up on modern gadgets and appliances, which plays into the consumption and technology story; and the other is the upper middle class and affluent Chinese upgrading their lifestyle and spending more on travel and luxury items. Zhejiang Supor is part of the first trend, where we see strong demand in the cookware and small appliances sector.

Smartphones: China is the world’s biggest market for smartphones, with shipments of around 100 million every quarter in the last few years. Chinese smartphone manufacturers now account for nearly a quarter of the global smartphone market and continue to grow rapidly. Smartphone camera component maker Sunny Optical Technology which recently reported a pick-up in handset-camera module shipments, reflects the considerable growth opportunities in China’s smartphone market.

Alcoholic beverages: The upmarket consumer trends are reflected by luxury brands such as Kweichow Moutai. The company, which derives its name from Maotai, a small town in South-West China, is known for its fiery-flavoured spirit. The distiller has created a distinct national brand, which plays very strongly into to the aspirational theme among the mass affluent.

Low-cost airlines: Apart from goods, the other big export from China is its tourists, with 145 million overseas trips made in 2017. This has helped boost the travel industry in Asia, enhancing the prospects of travel service provider China International Travel Service Corporation, which has gained from its duty-free business. The expanding army of Chinese travellers will also give a fillip to the airline industry, with carriers such as no-frills airline Cebu Pacific Air likely to benefit.

Dairy: This sector is showing robust growth, thanks to rising demand for flavoured yoghurt and yoghurt based drinks. Sales in this sector have grown in recently years as health-conscious Asian consumers switch to low-fat dairy products. Dairy firm China Mengniu Dairy is one such company that is expected to continue to gain from this trend.

Banking: This is another area characterised by underpenetrated markets. In 2008, for instance, India and Indonesia had nine and seven commercial bank branches per 100,000 adults (1) respectively. By 2016, the number had increased to 14 in India and 17 in Indonesia and we expect this growth (to continue. Private banks with strong and experienced management teams will benefit as financial service penetration continues to increase.

Infrastructure: The logistics industry in India is worth currently around US$160 billion and is likely to rise to US$215 billion by 2020, growing at a compound annual growth rate (CAGR) of 10.5 per cent. Container Corporation of India is a dominant player in the container train operator market in India, with a 70 per cent share in rail container freight. The company is now expanding into logistics parks to provide solutions for foreign and domestic sectors.

Allocation to undiscovered, niche and entrepreneurial firms will help investors tap into fast-moving Asian markets. These quality, ‘all-weather’ companies that perform through the cycle not only offer the potential for higher growth, but also greater diversification within portfolios amid volatile market conditions and growing trade war concerns. Active stock picking, coupled with sound investment research will help investors identify these dynamic, growth-oriented players.

Past performance is not a suitable indicator of future results 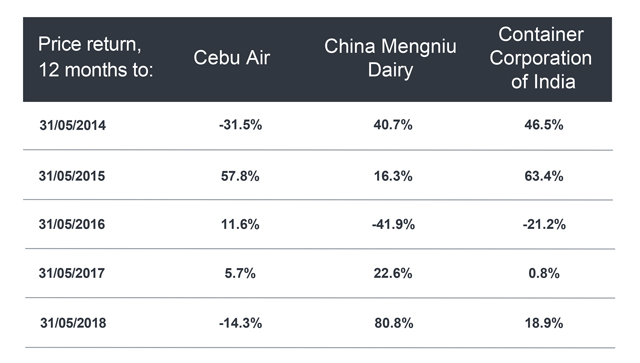 Past performance is not a suitable indicator of future results.