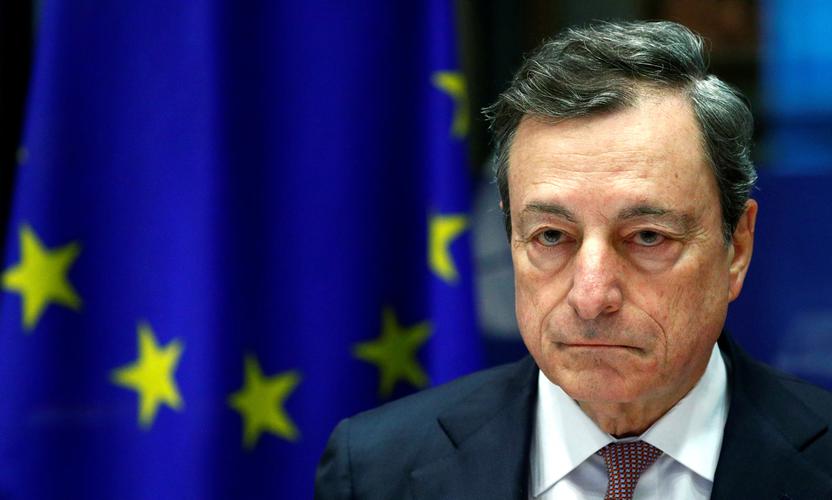 The ECB adjusted its forward guidance, adding that rates will stay at present levels ‘or lower’ through the first half of next year. The addition of these two words prepares markets for a lowering of the ECB’s key deposit rate in September, with economists likely to pencil in a 10bps cut to -0.5 per cent.

Importantly, it seemed to loosen its monetary policy aim from ‘below but close to 2 per cent’ to a more open statement, implicitly tolerating ‘symmetric’ inflation overshoots.

The ECB also plans to introduce a ‘tiering’ system to ‘mitigate’ the impact of lower rates on banking sector profitability. This opens the door to even deeper cuts, whether in September or later. In addition, the ECB is now deciding on the size and composition of asset purchases, likely a mix of sovereign quantitative easing (QE) and private Corporate Sector Purchase Programme (CSPP).

The press conference gave little away as to the shape of the policy package. When asked directly about the size of rate cuts and form of asset purchases, President Mario Draghi shot down the notion that this had even been discussed.

A subtle but important change in language around the inflation target was a hint that this package will be on the larger side. Previously, the statement aimed for “convergence of inflation to levels that are below, but close to, 2 per cent over the medium term”. This month, it only talked of “convergence of inflation to its aim”. This more open-ended statement implies tolerance of “symmetry” in inflation, allowing for overshoots above 2 per cent, and thus an easier policy bias in general.

That said, the size of any QE programme is likely to be considerably smaller than the 80 billion euros a month seen at the peak of the previous QE. Given how far yields and credit spreads have moved, the incremental impact may be small.

A forceful response to uncertainty, against a mixed economic backdrop

The ECB looks set to respond to a mixed picture in the European economy with unreserved and forceful action. The Eurozone’s domestic economy has actually looked resilient, with unemployment falling at a fast pace and wages broadly accelerating. Similarly, service sector activity and consumption growth look stable at decent levels.

However, this is threatened by weak exports and a sluggish industrial sector, as shown by concerning manufacturing PMI and IFO surveys earlier in the week. President Draghi characterised this situation as getting “worse and worse”. Arguably, there is not much the ECB can do to offset this threat, with China’s growth and the emerging markets cycle more important determinants.

Uncertainties surrounding possible US tariffs on EU products, particularly on automobile exports, are clearly weighing on ECB members’ decision-making. The same applies to the possibility of a hard Brexit denting growth in the fourth quarter. Easing will partly offset the worsening in financial conditions and sentiment that such geopolitical uncertainty may have been causing. However, the ECB will find itself left with very limited ammunition to combat any actual economic hit from adverse geopolitical developments.

Ultimate cover for dovish policy is given by still-subdued core inflation, which looks unlikely to reach 2 per cent in the next year or so.

Underlying price pressures do seem to be gradually building, which is to be expected as the Eurozone’s recovery matures. But the ECB clearly does not want to leave this grinding recovery to chance, with Draghi pointing to declining inflation expectations and limited passthrough from a tight labour market into wage-push inflation.

The ECB’s dovish stance and prospects of an even greater negative deposit rate and a new round of government and private-sector bond purchases will likely continue to fuel the demand for yield. In the absence of alternatives, investors will have to look elsewhere for income.

Against this backdrop, we expect credit markets to remain well supported, with European corporate bonds that can still deliver a positive yield and display strong fundamentals to be in high demand compared to other regions.