China is turbocharging credit growth again, as revealed in March’s huge total social financing print, which is up 40 per cent in the first quarter compared to last year. Combined with incremental loosening of housing policy and stronger-than-expected real estate data, it feels like China has returned to brute force stimulus.

The question is how deep and how far this will extend. The answer may lie in first-quarter GDP data, with China reporting headline growth of 6.4 per cent year-on-year. A closer look reveals more ominous signs: Real service-sector growth slowed to the worst on record and quarterly nominal growth was marginally the lowest since 2009.

This weakness explains why Beijing engineered such a huge quarter of credit expansion, contrary to its own rhetoric on deleveraging. It also suggests that policymakers will not prematurely slam the brakes on easing monetary and fiscal policy. This massive injection of credit probably won’t be repeated; however, supply should still be strong, feeding into real activity by late 2019.

Meanwhile, the Fed’s dovishness has returned and looks set to stick around, given its renewed focus on undershooting inflation over supporting domestic growth (which is slowing). The Fed even signaled it would start buying US Treasuries again in October, meaning it will achieve only a small fraction of the balance sheet unwind it initially intended. This is a concrete positive for EM economies and assets.

Despite some renewed fears about US dollar strength, 14 of the 20 most-traded EM currencies have posted positive returns versus the dollar in the year-to-date, compared with just four in 2018. This allows for EM policy easing to become a trend. India cut rates in April for the second time this year, while the Philippines and Russia have also signaled imminent cuts. Markets have cheered this dovishness, anticipating it will eventually spread to other countries like Indonesia and Mexico.

While March was a better month for EM activity, we caution against extrapolating this too far. The lag between credit and actual activity is at least a few quarters. China’s stimulus has only just come through, and EM central banks and the Fed were hiking up to the end of 2018.

March’s bounce is unlikely to be policy-driven, and probably lacks the fundamental drivers to sustain it into the second quarter. Economic data could remain troubling for another couple of months, and our Fidelity Leading Indicator still suggests quarterly deceleration into the second half of the year. 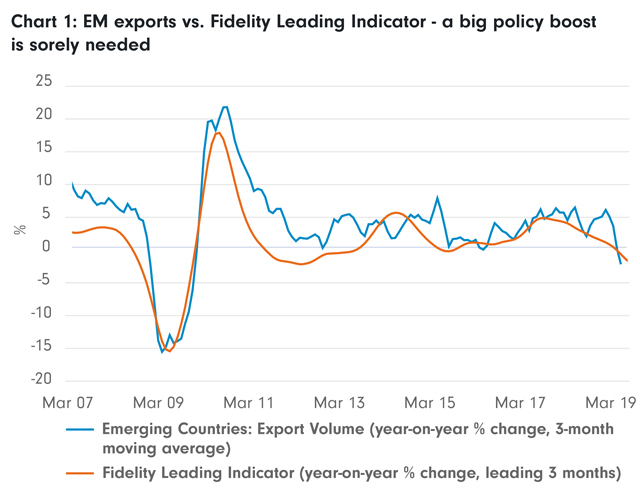