China’s credit impulse, a measure of the change of new credit issued as a percentage of GDP, may soon turn somewhat positive as recent stimulus feeds through. But this has a lag of two quarters or more - and suggests further slowing in the near-term. Double-digit declines in Chinese industrial profits at the start of 2019 don’t bode well for investment either. Last year’s hiking cycles in almost every major emerging economy are also headwinds, combined with a now-slowing US economy.

EMs boosted by a Fed pause and China easing

Markets have been given a boost by the Fed’s pause in its rate hike cycle and China’s easing measures. These are, after all, the two biggest drivers for EMs.

But to rise further, markets may need to see more evidence that EMs have successfully weathered the headwinds they were facing coming into 2019. Recall that EM exports had collapsed from double-digit growth to a marginal year-on-year contraction in the final months of 2018.

As concrete evidence of an upturn remains some way off, market volatility and long positioning is likely to be tested. An ‘L-shaped stabilisation’ in the second half of this year seems more likely than an imminent ‘V-shaped recovery’.

One key focus for EM is the US Dollar; a softer greenback is key to easier financial conditions in emerging markets. Clearly, the Fed has conducted a very dovish U-turn. Moreover, after chugging along through 2018, the US economy has finally started slowing.

Indeed, our EM GEAR indicator has outperformed the US for the first time in twelve months. There is also significant room for EM central banks to ease - in stark contrast to developed markets. 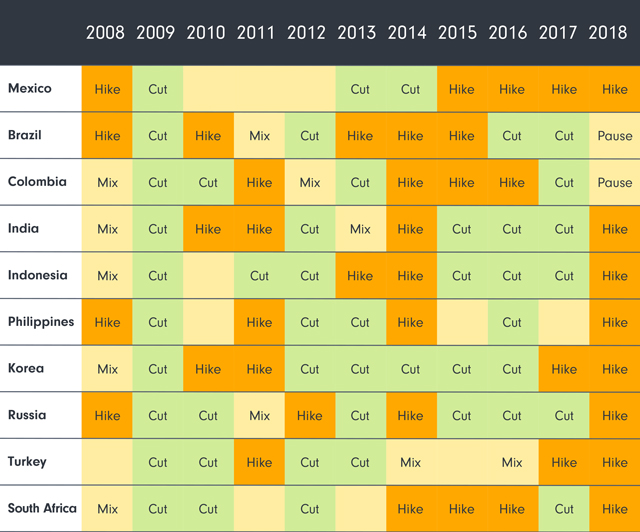 2018 had across-the-board tightening, which will weigh on activity but allows for material easing in 2019

Optimism about Chinese stimulus may be overdone

After the US, the second key focus is the magnitude and efficacy of China’s stimulus. China is clearly easing but piecemeal measures added since last summer didn’t prevent a very ugly run of data. It’s also clear that this easing is necessary, given last year’s slowdown, woeful sentiment, and a private sector credit crunch.

However, markets may be overestimating the size of the measures. Local governments will have a far harder time raising funds from land sales, a key source of revenue, after a huge 2018. Moreover, Finance Minister Liu Kun reiterated that local governments would be on a tightening band and that value-added tax cuts were the main dish of easing this year.

This brings us onto the potentially disappointing efficacy of stimulus in China. Tax and fee cuts are sensible but are likely to have a considerably smaller multiplier effect than China’s ‘brute-force’ infrastructure and real estate stimulus efforts in previous slowdowns. And despite January’s surge in credit, the strains on the mechanisms for transmitting that credit to private sector companies don’t appear to have been resolved.